↓
Home→Surveying→How is this done? Construction of bridges. 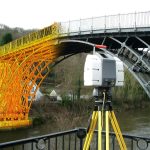 Classification of bridges and types of span structures.

Span structures are distinguished constructively, according to the design scheme of the facility and the material of manufacture. For each specific case, a certain type is selected, taking into account the terms of reference and the existing conditions.

Depending on the initial data and operating conditions for each concrete structure, engineers select the optimal design that determines the type of bridge and its main physical and operational characteristics and makes up a scheme of span structures.

Combined type constructions. Combine the same arched and girder principle design schemes. They have universal application. Frame span structure. Can have a T- or U-shaped appearance, span structures – crossbars, supports – construction sites. Hanging span structure. Intermediate supports are not installed, the supporting structure of flexible units, the fastening is made to the pylons.

Arched bridges with lower ride often do with a tightening, perceiving the archway. This allows instead of massive support supports, perceiving and transmitting to the ground, in addition to vertical loads, also the spacing forces of the arch, to use lighter supports, on which only vertical loads act. Arched bridges with a tightening can be installed on weak grounds.[/vc_column_text][vc_empty_space][st_image_slider_module slider_height=”400″ images=”14056,14052,14051,14057,14055,14054″][vc_empty_space][vc_column_text]Reinforced concrete structures of span structures are mainly used for small spans, up to 33 meters. The use of standard reinforced concrete beams is economically justified far from large settlements where there are no increased architectural requirements and short construction times. The lack of designs – high self-weight, requiring heavy lifting equipment at the stage of construction and installation works and more massive supports and foundations at the stage of operation, increased production time for construction and installation work, associated with wet processes, lack of architectural expressiveness.

Large own mass requires the construction of a powerful foundation. They are used in case of need to create a simple small and inexpensive bridge construction away from the city limits.

The most rational for span structures, more than 70% of all railway bridges are constructed of metal, since steel works equally well both for tension and compression and as much as possible meets the requirements of perceiving large alternating forces from railway loads. The advantages of metal bridges include the stability of physicomechanical characteristics of steel throughout the life cycle of the structure (up to 100 years), as well as high rates of installation. Separate elements are assembled at the manufacturing enterprises, at the construction site, only the assembly of the finished elements in a single construction takes place. The shortcomings include the need to perform periodic measures to protect metal elements from corrosion.

The use of bridge metal structures allows using high-tech techniques during construction – the reliability of all loaded units is significantly increased, labor productivity is increased, cost of production is reduced, commissioning of the facility is accelerated. All these factors significantly shorten the payback period of investments.

The supports of arched bridges are always massive, since they must be designed for perception of the strut. For large spans, arches are always more economical than beam structures, but only for span structures. Because of the large development of the supports in the cross section, the bridge of the arch system is cheaper than the beam system only at the height of the supports up to 2 meters.

Arched bridges are characteristic for mountain conditions, since they allow to block a larger span than beams, and in the conditions of mountain relief the construction of additional supports is difficult. Also, the specific area of ​​application of arched bridges is due to the fact that they require a large under-floor space, especially with riding on top, which leads to an increase in cost and complexity of construction of embankments approaches that can reach a height of 20 m; the likelihood of landslides on such mounds during the initial period of their exploitation increases.[/vc_column_text][/vc_column][/vc_row]