↓
Home→Surveying→The best stadiums in the world 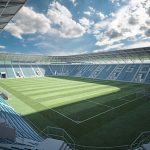 The Milan stadium is distinguished for its smart-brutal appearance, and it can quite afford it. San Siro Stadium is the home arena of the two clubs “Milan” and “Inter”. Designed an outstanding sports building architect Ulysses Stacini and engineer Alberto Kuzhini, and opened to the public in 1926.

The majestic stadium “Saitama 2002” was opened in 2001 especially for the World Cup 2002. Its design was developed by the Japanese bureau Azusa Sekkei Co., Ltd., and the construction of such a machine worked on the company Mitsubishi Construction. The stadium reaches the height of the five-story building, and can accommodate 63 700 spectators.

In 2015, a new stadium appeared in Bordeaux. He seemed to materialize from the air – so light and transparent design was obtained from the Bureau Herzog & de Meuron. The architects delicately and elegantly added the stadium to the surrounding landscape and presented the city with a new sports arena, designed for 42,000 spectators. Snow-white slender columns surrounding the building give a feeling of weightlessness to the building.

The National Stadium of Singapore is multifunctional, and due to its architectural and technical features, it can operate in three modes: “Football / Rugby”, “Cricket”, “Athletics”. The DP architects worked together with Arup and AECOM to create the stadium. It is part of a whole sports center, which includes several important sports and cultural facilities.

The Brazilian football stadium was built in Manaus specifically for the World Cup in 2014. His project was occupied by German bro gmp (Gerkan, Marg and Partners), whose architects were inspired by the Amazonian forests that surround the city of Manaus. And the metal pattern covering the stadium is a reference to the fact that this region is famous for its skillful weaving of straw baskets.

The National Stadium of Brazil was first built in 1974. In 2010, it was demolished and rebuilt by 2013 with the forces already known to us gmp Architekten together with schlaich bergermann und partner + Castro Mello Arquitetos. For a city with the status of a UNESCO World Heritage Site, the stadium must be special, and most importantly – not out of the general architectural landscape. The minimalist stadium is surrounded by a “forest” of concrete columns – the authors of the project specifically chose this material, referring to the architectural history of the city, built by Oscar Niemeyer.[/vc_column_text][/vc_column][/vc_row]